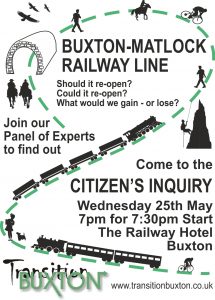 This was held on 25th May 2011. The idea was to gather all the facts, and dispel some of the myths, around the issue of whether the line between Buxton and Matlock could or should be re-opened as a railway.

Our hugely knowledgeable panel covered every aspect of the issue. Why did the railway close in the first place, what did the studies up to 2004 actually conclude, what has changed since then and would they reach the same conclusion now? Could the railway re-open? What do we mean by re-open anyway, are we looking at a slow speed heritage or community line, or a high speed service to St Pancras, Paris and beyond – or something in between? Where does freight come into all this? And if it did re-open, what would happen to the cycle trail, and what else would we stand to lose?

A full report of the proceedings is avaiable to download.

Spanish global utility Iberdrola set to increase capital spending on renewables in 2020 to €10Bn, even in the face of the economic slowdown to develop 9GW of capacity, including 30 solar farms & 50 onshore wind parks.

About an hour ago

Important opportunity to influence policy on land use and rewilding ow.ly/H6sa30qvVZi

We're joining in with the daily Earth Day Challenge leading up to 22 April. Today it's an easy one - tag 3 friends to take action for the planet @TransitionNM @CongletonHydro @BCA1967 twitter.com/EarthDay…

Cement, one of the hardest industries to de-carbonise, is also one of the biggest pollutors in the Peak District, but there is hope tinyurl.com/sfwvqyp