A community orchard is one where the fruit is available for free for anyone in the community. When we first decided we’d set one up in Buxton we thought in terms of a single location and spent a lot of time looking for a suitable site in the town, to no avail. Then we realised that a Dispersed Community Orchard was a far better idea. Not only are suitable small plots much easier to find, and we can keep expanding the orchard for ever as new sites become available, but a lot more people can benefit from having an orchard near by. Last but not least the responsibility for looking after the trees can more easily be spread around, with a small team of people taking care of each site. 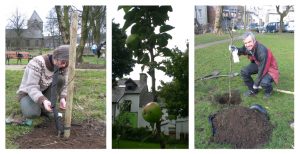 We started planting in earnest in early 2011, and have added to the orchard every winter since then. We now have well over 50 trees in the town spread across ten sites. The majority are apple but we also have pear, cherry, greengage, plum and damson. We’re trialling different varieties to see which do best in the Buxton climate.

You can see where they all are on this map. Most of the trees have been sponsored by individual donations. Inevitably a few get damaged or die, but we do always replace them as soon as we can.

We’re always on the lookout for more sites, and we also welcome volunteers to join our orchard maintenance team. If you’d like to get involved, contact us.

And of course, if we are to keep on expanding the orchard, by planting more trees, we need more sponsors. It costs £25 to provide the tree, stake, tie, guard and a contribution towards ongoing maintenance, and we provide a gift certificate if you wish. You can download the sponsorship form here, or get in touch.

This working party took place on a fine March morning and was arranged so as to give some help to the current custodians of the site, Mary and Mike Monaghan. Ten people were in attendance and we worked on about eight trees for about two hours.

This had always been an ‘experimental’ site, being in a very exposed position, and also not being very visible to the general public. Nobody seemed to be very sure when the trees were planted. The trees are situated at the back of a rough grass area behind the play area and this area is not subject to mowing or strimming.

There was a variety of trees, not all identified in their winter plumage, but maybe a couple of damsons and, seemingly, a horse-chestnut. Some trees had leaned over quite significantly and these were pulled into a rather more upright position by means of a diagonal stake and re-tying. At least three apple trees appeared to be thriving and these were very lightly pruned. What may have been damson trees were left for possible summer pruning.

All the trees had weeds and nettle roots etc cleared from around their base and a layers of compost, cardboard, compost were applied.  Rabbit guards were checked and repaired or replaced as necessary.

A woman living just up the road, came over to see what was going on and kindly returned later with cups of tea and Jaffa cakes for our elevenses. Conversations were had with folk visiting the play area. Two local residents living opposite the site also wondered what we were up to and said that it was pleasing to see the blossom on at least some of the trees in the spring.

The event was agreed to have been a success. Many thanks to fellow Transition Buxton members and also to Lewis and Charlie who discovered us on Facebook, all of whom pulled their weight.

Spanish global utility Iberdrola set to increase capital spending on renewables in 2020 to €10Bn, even in the face of the economic slowdown to develop 9GW of capacity, including 30 solar farms & 50 onshore wind parks.

Important opportunity to influence policy on land use and rewilding ow.ly/H6sa30qvVZi

About an hour ago

We're joining in with the daily Earth Day Challenge leading up to 22 April. Today it's an easy one - tag 3 friends to take action for the planet @TransitionNM @CongletonHydro @BCA1967 twitter.com/EarthDay…

Cement, one of the hardest industries to de-carbonise, is also one of the biggest pollutors in the Peak District, but there is hope tinyurl.com/sfwvqyp